Phi is a ratio of lengths which possesses many remarkable characteristics.

A unique and telling feature of Phi is that if you add 1 to its value, the result is Phi squared. Equally strange, if you subtract one from Phi the result is 1/Phi (i.e., the reciprocal value of Phi).

Said another way, add 1 to this value and you produce an additional dimension, a square from a line. Subtract one from this value and you arrive at a dimensionless transcendental value. I do believe that this number, Phi, is a structural essential within the “operation” of the conscious field.

Want to see Phi? How can one construct it? It’s easy!

2) Connect two of its corners as shown below

Phi is the ratio of lengths AB:BC

The diagram below shows some other key geometric constructs based upon the “Golden Ratio”.

Some points of note:

2) All three sides of the triangle formed by points A, B and C are divided by the various intersections of the circle and pentagon into the Phi ratio and other directly related lengths.

Below is another diagram showing some interesting Phi based geometric relationships.

So, how may one compute the value of Phi with arbitrary precision?

This is also fairly easy to do provided you remember your basic Algebra. Start by taking the ratio of lengths given by AB and AC as shown below.

My own theory of mathematics (The Foundational Mathematics) is that the conscious field, of which all realms of existence are an inseparable part, in reality only makes provision for values between 0 and 1.

The distance between 0 and 1 may be divided and made vastly manifold to any arbitrary extent that the consciousness field of mind can conceive of. What we perceive as integers are just a play of the 5 human senses.

Think of it this way.

You look at your hand and you see 5 fingers. From the quantum mechanical perspective however, there is no differentiation between your body and the surrounding space. There are not five fingers there at all, only an undifferentiated field of energetic vibration. From this level one can see that the idea of fingers is a construct of the mind only – as is the business of counting them. The senses of our body provide a sort of lens through which we experience the conscious field. It is the case that the conscious field connects everything that is together. This is because everything in existence emanates as a manifestation of the One Conscious field. The lens of the physical body creates an apparently solid physical experience from this field but the dualistic reality of subject and object, however convincing it may be, is merely illusion.

Here is another way to see what I am trying to express. The integer 5 is really a universe of 1 being considered in 5 parts.

So then for counting integers one through five:

In reality we are counting fractional areas of one:

As another example let look at counting  integers one through seven:

again, here we are counting fractional areas of one:

When one develops an understanding and working knowledge of this basis, then suddenly mysteries such as the nature of primes become much easier to comprehend and work with. This discovery enables for the first time in more then two millennium ground for traction in significant forward progress within the field of number theory. It will of course be no small challenge to convince the majority of scientists in the world of the unreality of integers and the illusory nature of sensual experience. Still, this important paradigm shift is the path down which our technological evolution lies.

So how does this relate to understanding Phi?

In Foundational Mathematics numbers do not represent ratios of lengths but rather they correspond directly to scale in terms of growth and contraction. The number 1 enjoys the distinction of representing the unified whole. The Uni – Verse, Creation’s One – Song. The number One is all that consciousness has manifested into apparent being while zero represents the dimensionless infinite potential of the unmanifested Mind.

What is actually meant by counting two, is the consideration of a single universe of mind as two parts.  When one counts to three, perhaps without knowing it they have just created 1 of 3 parts in the conscious field, NOT 3 portions of 1.

I know that many of you who read this will think that such an assertion is beyond absurd. “Of course I can count to 3, it’s one of the first things I learned how to do!”, you’ll say.  I am telling you that from the perspective of Foundational Mathematics, it is an incorrect approach. The universe simply won’t cooperate with you on this forever. It will present you with such mischief as infinities beyond the range of comprehension, oddities such as Prime Numbers which defy all explanation, and myriad other problems akin to chasing shadows. Nature will not tolerate people trying to count whole new Universes into being!

Perhaps Phi’s inverse value should be named after the Greek numeral 6, “Stigma” or “Ϛ” since it is itself an important value for the Foundational Mathematician. Stigma, Ϛ = ~ 0.618033

In the algebra Phi tells us more about itself.

To get another perspective on this situation, we can re-arrange the equation a bit and think about it from a slightly different vantage.

Phi and the Fibonacci Series

In the late 1100′s, Fibonacci noticed something peculiar about the following series of numbers (now called the Fibonacci Series).

In case you don’t see it, the sequence builds upon itself by always adding the most recent result with the previous. For example, the next value in the sequence above would be found by adding 233 with 144 which is 377.

Fibonacci took a close look at the ratios produced by this series as given below:

As is plain to see from the above listing, what Fibonacci found is that the higher you are in the series, the more the value of the ratio converges with Phi.

I have developed a chart showing this. I have this chart in accordance with my numeric polarity theory showing how the interlaced positive and negative magnetic polarity cycles in the Fibonacci series.

For those interested, below is the error term of the convergence taken to 243 significant figures. Again, my Numeric Polarity is indicated.

The table below expresses the Fibonacci series values as points on the circle of 12 within the incrementation they appear. 12 is relevant here because the Fibonacci sequence itself naturally cycles from zero to zero through 12 completing the full cycle of polarity in 2Pi (ie. 24)

Here is the same chart viewed from a “higher altitude”.

Comparison of Numeric Polarity with a Pyramid and Torus 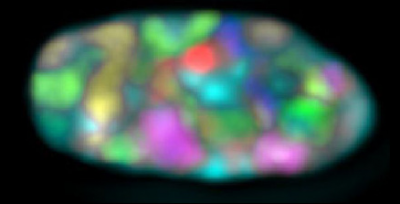 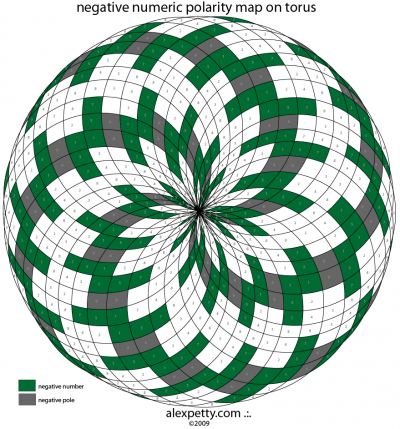 Comparison of Numeric Polarity with a Pyramid and Torus